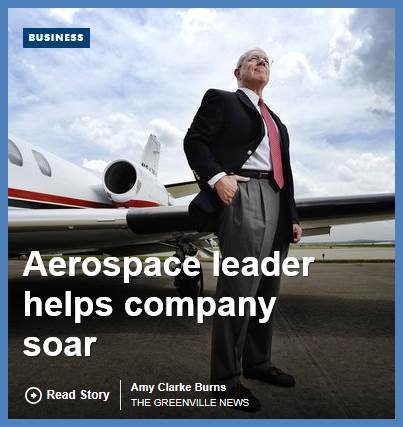 Steve Townes has been called a turnaround specialist, an entrepreneur, a champion, a soldier, a cheerleader and maybe, on occasion, even a stubborn mule. But no one's ever called him a loser.

The president and CEO of Louis Berger Services, Townes has a long string of successful businesses on his resume, companies he's saved from the brink or raised to levels of success unimagined by their founders.

"I think that enterprise building is in my blood," he said.

But the South Carolina aerospace industry leader whose previous mantra was "buy, build, improve, resell" has a new business focus, and this one's about staying put.

Flying on a fluke

Townes, a West Point graduate, joked that he got his first start in airplanes by jumping out of them as an officer with the Army Rangers.

Really, a position with a huge aerospace company in Texas was the best job offer he got after leaving the Army and getting an MBA.

It was there that he learned the ropes, he said. And after several years and a few quick promotions, he got a call from the leaders of Stevens Aviation in Greenville. They were looking for an executive to help turn around the struggling company.

"I had to look, where is Greenville?" Townes said with a laugh.

Over the course of about four years, Stevens tripled its size, restored its profitability and added new lines of business.

Then he got another call, this one asking him to come be president and CEO of an aviation services subsidiary of a large parent corporation. That parent was Dial Corp.

The soap maker had at one point in its history been purchased by Greyhound Corp. and was for years known by the name Greyhound Dial.

"They fancied themselves as a transportation services conglomerate, so they bought all kinds of companies, one of which was Aircraft Services International," Townes said.

When Townes was offered the job by Dial head John Teets, he decided to take an audacious tack.

"I very politely said, 'Sir, since I believe I'm being hired to be window dressing so you can improve the company and then sell it since it no longer fits with this consumer products company called Dial, why don't you just sell it to me?"

Townes said he budgeted half his savings and six months to get the deal done. Working from the walk-up attic of an ob/gyn office on Pelham Road, Townes spent 11 months and 110 percent of his savings.

"I was in my wilderness mode, with a lantern searching for capital," he said. "I knew if we could buy that company, we could really do something with it."

And he did. He eventually won out in his bid and went on to build a successful business that a few years later he sold to a larger conglomerate.

"We bought it as a somewhat undermanaged, rather tattered, enterprise. When we sold it, it was rated best in class," he said.

Steve Townes, president and CEO of Louis Berger Services, talks about his forever donation to the school he attended. MYKAL McELDOWNEY/Staff. (See video of this Townes interview online at the bottom of this entry).

Townes would go on to repeat the process with several other companies, all of them under the umbrella of his company Ranger Aerospace.

One of the most significant feathers in his cap was a company called Keystone Helicopter.

The 50-year-old, Philadelphia-based, family firm had been stagnant for several years, Townes said. He came in and changed all that, taking the company over four years from $38 million a year to $132 million a year.

He and his investors bought Keystone for $19 million and sold it for more than $90 million.

"I'm not a mathematician, but the finance guys told me it worked out really well for everybody," Townes quipped.

But even that dream story wasn't without its nightmares.

In a monthly meeting of company leaders, the finance officer said under his breath, "Before we start the ops review, I think we're overdrawn at the bank," Townes recalled. Overdrawn to the tune of $1.6 million.

That sinking feeling in your gut? Townes knew it well at that moment.

He rallied investors to raise the funds and had the money back in the bank by noon the following day.

"The business went on to prosper in a really big way. Today that little $38 million company is $700 million and the centerpiece of Sikorsky Helicopter's services sector," Townes said.

The idea was to buy up and improve small aviation services firms to build a larger conglomerate.

"In the worst recession in 50 years, let's buy companies and build a $100 million enterprise. Oh, and let's do it in government services," he said. "It seems a little contrarian."

"He'd go through walls to get things done," he said. "He's been forged in steel, and people feel confident getting behind him."

Townes bought a few companies in a row and along the way relocated the headquarters of his company from the Dallas area back to Greenville, which he had left after departing Stevens Aviation but which always held a warm spot in his heart.

Four years after starting Ranger International, the industry was facing massive Department of Defense cuts and the budget sequestration. So Townes, who had always been on the buying end of a deal, put himself on the other side of the bargaining table and sold Ranger International to Berger Group, a $1 billion parent company based in New Jersey.

His company was renamed Louis Berger Services, and all of the operations and maintenance subsidiaries within Berger have been consolidated under Townes and his Greenville-based headquarters.

Now, instead of building a company for a few years and then "putting a ribbon on it" to sell to a bigger firm, the goal is to build his local company to $500 million or more by 2020, he said.

"You need a guy who's not afraid of that many zeroes in a number," said Phil Yanov, producer of Tech After Five and an active member of Greenville's business community.

"I don't know what he builds. I don't care," he said. "Having a mind like that working in our backyard, that's awesome."

John Warner, head of Innoventure, said having a "passionate, tenacious champion" like Townes changes Greenville for the better.

The two were recently meeting with government officials to discuss a new plan for a personal rapid transit system in Greenville.

"Even the more community-oriented projects need people like Steve behind them that bring passion and energy to them because that's how they get done," Warner said. "Anything he's gotten behind and pushed has been successful."

Townes' position in aerospace puts him on the leading edge of a boom for the industry in South Carolina. An Avalanche Consulting report from 2013 ranks the state No. 1 for growth in aerospace with a 600 percent increase in jobs over five years.

The industry currently employs 20,000 across more than 200 aerospace or aviation businesses, according to Allison Skipper with the state Department of Commerce.

Some might say Townes' success comes from a recalcitrant streak, a simple refusal to fail. It might be an apt comparison for someone who has spent part of his life and a chunk of his money on the animal whose name has become synonymous with stubbornness.

Two mules are the mascot for the Army as a whole. They're housed at and associated primarily with West Point where a handful of cadets known as mule riders train and care for them on a daily basis, including riding them onto the field during football games.

During his time at West Point, Townes was a mule rider and head Rabble Rouser ("not a cheerleader," he asserted).

About a dozen years ago, leaders at West Point had gotten word that one of their esteemed alums had sold a company for a huge gain and approached him about making a donation to his alma mater in the form of purchasing a mule.

His one condition: that one of the mules always be named Ranger in honor of special operations forces living and dead. The two current mules, which came to the school in 2011, are Stryker and Ranger III.

"Some people give away chairs of economics, and I'm squandering my grandchildren's inheritance on pack animals in perpetuity," Townes said with a laugh.

Seemingly sprier than his 60-plus years — "vitamins and workouts help," he said — Townes said retirement isn't part of his future plans.

"I'd like to be the doddering old drooling fool that comes out at the Christmas party 20 or 30 years from now on my walker to give the short after-dinner speech about how good it was in the good old days," he said.

If things keep following the promising path that Townes has laid, they'll be good old days for sure.