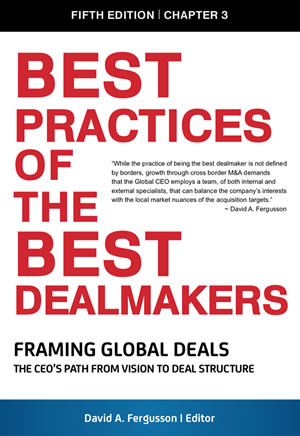 Excerpted from "The Best Practices of the Best Dealmakers" series edited by David A. Fergusson and available in print and the online libraries of Merrill Corporation and The M&A Advisor.

Part I: Identifying M&A Targets in the Global Market
Perspectives from a Middle-Market CEO in a Unique Space

"We're steadily opening in new cities. Each single new city we go into is a just modest incremental risk—we're not betting on one huge deal. It's a remarkable value play." – Steve Townes, CEO and founder, Ranger Aerospace.

The importance of the CEO in formulating an organization's M&A strategy cannot be overstated, according to the professionals who contributed to Chapter 2 in this 5th edition of Best Practices of the Best Dealmakers. This installment will explore how global CEOs and their teams of advisors get from vision to transaction framework, using both time-honored and innovative techniques—often including interpersonal skills—to achieve important business objectives such as optimizing global supply chain, expanding market share, satisfying neo-mercantile mandates, and realizing shareholder value.

Capping a career that began in the military and led to the aviation industry, Steve Townes founded Ranger Aerospace in 1997 as an "aerospace services investor company," which he describes as a "hybrid mix between private equity capital and deep aerospace expertise." Over nearly two decades, Ranger Aerospace has been a catalyst and steward for multiple deals involving enterprises that are vitally important to the air cargo business and are located at dozens of airports around the world but are largely out of public view. One of the early companies Townes eyed to invest in—seventeen years ago—was ACL Airshop, which manufactures, leases, and services equipment used in loading and off-loading cargo at many international airports. It was targeted as an add-on acquisition to "ASIG" (Aircraft Service International Group, Inc.), a rapidly growing airport services firm which Ranger owned at that time. "It looked like a great fit at the time, but we did not have the financial wherewithal to take it forward," Townes said. "It was a collegial atmosphere when we first talked, and seventeen years later we talked again with the owner's son-in-law, who was now running the company. And now we had the strongest capitalization that we have had in our twenty-year history. We had solid certainty of closing." The ACL acquisition closed in February 2016. "In the seven fast months since we bought the company we've opened operations in four more international hub airports and expanded in others. Our aim is to double the business within five years," Townes said.

In previous ventures, Ranger has employed as many as 4,250 people at up to 56 airports around the globe. ACL Airshop, though smaller with roughly 200 people at 34 major hubs worldwide, commands a strong niche. Townes' holding company, based in Greenville, South Carolina, remains extremely lean—when they had thousands of employees, Ranger was just 5 executives and 4 staff support. Today with two consolidation platforms percolating simultaneously, Ranger Aerospace is just three people: Townes, the CFO, and one Marketing Support assistant. "We want to keep our holding team small, always," he said. "But we also want to be a good employer to all of those who work at our holdings. We are highly principled in our employment practices, making our numbers through strong marketing and continuous operational improvements, not slashing and burning." The small corporate footprint also means that Townes is intimately involved in every step of every deal process–from formulating strategy with his board to negotiating with potential acquisitions and selling off business units when his investments have been maximized.

In the case of ACL Airshop, Townes said he and his team first looked at the overall market. "We saw it has a potential for five percent real annual growth over the next twenty years, and it could become even stronger because of the burgeoning impact of just-in-time inventory and overnight shipments. We asked, 'Where does this company sit competitively?' The answer was a very narrow but defensible niche. We're almost invisible–we operate on the edge of the airport. We don't touch any cargo or load planes. What we do is manufacture, lease, sell, and repair all the things you need to load your airplanes—pallets, containers, nets, and other "cargo control" products. It sounds mundane, but everything has to be engineered to Federal Aviation Administration (FAA) specs. And there are logistical surprises every day in the air cargo world—a carrier in Singapore needs ten more pallets tonight to fulfill a big Amazon shipment. So they go down to ACL Airshop at the end of the runway and lease ten pallets for a few dollars each a day. Yet each one of those pallets might hold a stack of cargo worth $100,000 for the end-customer. It's a small but essential incremental decision to use ACL Airshop for such timecritical and flight-critical support apparatus. ACL Airshop solves problems for airlines cargo customers. We're really the only worldwide company of this kind, and there's a big barrier to entry. If someone wanted to replicate us they would have to invest about $50 million in assets and then get into about thirty-five of the top fifty airports around the world….very tough to do."

All of Ranger's acquisitions or joint ventures over the past two decades have involved cross-border transactions, Townes said. "Even though we're not Fortune 500, we've had some pretty adventurous experiences. We operate in China, in Brazil, Japan... we have operations in air cargo on six continents. Aviation is a very strictly regulated business, so you have to know the rules and regulations wherever you operate. So it's a very high hurdle if you don't understand the international complexities of aviation. You have FAA rules, local airport rules. You have to be cognizant that every airline has its own operating manual and unique expectations." In addition, Ranger has to deal with issues common to cross-border operations, such as currency fluctuations, taxes and tariffs, and local employment laws. "We've become pretty good at it over the years," he said. "We're steadily opening in new cities. Each single new city we go into is a just modest incremental risk—we're not betting on one huge deal. It's a remarkable value play."

Unlike large corporations, which have corporate development teams and multiple outside advisors, Townes said his approach to M&A stays mostly in-house. "The board is comprised of the operating company President, me, and our partners in multiple private equity institutional funds. Ranger stays especially tight with its institutional partners, always led by a Lead Investor. We take a look at various deals but we stick with what we know—aerospace services. I do M&A largely myself along with our CFO and the operating company presidents, plus several board members. They're constantly talking with intermediaries. Once people find out that Ranger is involved, interest goes up especially among middle market-sized companies who know our track record. We don't use external intermediaries if we can avoid it." The exception is when it comes time to sell a holding. "We always engage professional help on the sell side. We have a very short list of intermediaries who we know really well. We are not your typical private equity model that does three or more sales a year. It's more like every four to six years before we have a sale and by then we typically will have doubled or tripled the businesses." When he needs outside advisors on a deal, particularly in a foreign locale, he says he calls on a small network that he has worked with before. This is his advice for hiring outside advisors: "Don't go cheap. Always go with the best."