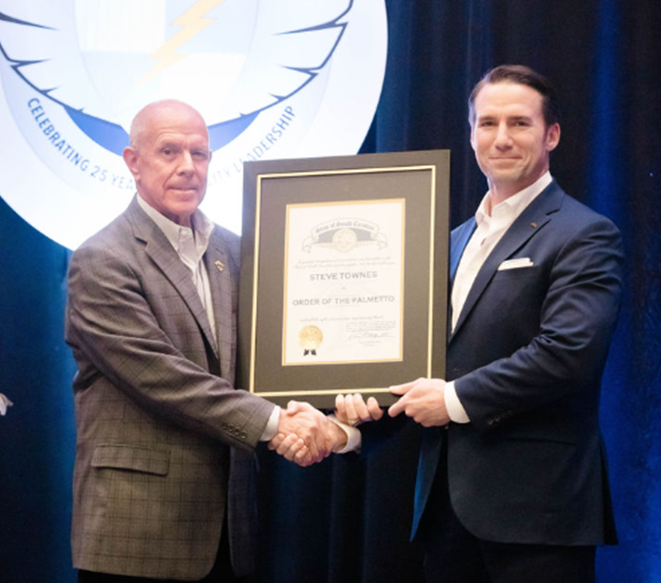 Steve Townes, CEO & founder of Ranger Aerospace and President & CEO of ACL Airshop, has been granted the “Order of the Palmetto” Award by the Governor of South Carolina. This award is the highest civilian honor granted by the State. It was presented by the Governor’s representative, State Rep. B. Cox, on Sept. 23, 2022 during the 25th anniversary celebration reception of Ranger Aerospace.

Townes has been instrumental in advocating for “Aviation High Schools” in the state, in order to grow more aerospace/aviation jobs in that burgeoning statewide sector. He was the first leadership voice from industry for such schools as the inaugural Chairman of the statewide consortium “SC Aerospace” and a tireless ongoing multi-years advocate and champion for this workforce initiative. These special schools give young people who cannot afford a college degree a clear chance at well-paid Skilled Trades jobs as FAA technical licensees in the hundreds of aerospace, aviation, and aero-maintenance support companies around the state and across the industry. 5 years ago there were zero such schools, now there are NINE, each tethered to one of the state-run vocational-technical colleges.

Townes has also been a long-serving progressive employer and CEO of aerospace services companies here, and each underwent accelerated growth and substantial investments in people and training, resulting in aggressive levels of job creation and sustainable expansion. His latest large-scale enterprise headquartered here, ACL Airshop, has support operations at 55 of the world’s Top 100 cargo airports, providing ULD equipment and technology-enabled logistics services to over 200 airlines in the global Air Cargo industry. The company has more than doubled in size in 5 years, with plans for continuing expansion. ACL Airshop also built a modern new Manufacturing Center in Greenville SC in recent years, choosing to build and create jobs in the company’s legacy hometown versus outsourcing it entirely to lower-cost overseas alternatives.

Upon receiving the Award, Townes said: “I am honored and humbled to accept this – it’s truly on behalf of all of our dedicated employees. People are the priceless soul of any successful enterprise, and we are proving that every day.”
RECENT HEADLINES